Lately I’ve been on a quest to provide a simple and highly secure configuration for Windows XP. As the last post focused on security, here is a small usability tip:

If you are using a PPPoE link (with an ADSL line connected directly to the computer for example), here are three things you can do to make the user’s life easier:

First, unbind any protocol (like TCP/IP) from the ASDL interface (not the virtual connection!) to avoid the warnings about being unable to find IP addresses, etc. PPPoE is a layer two protocol and in an ADSL context it is only used to encapsulate packets on the Ethernet level (ie it has no relation to TCP/IP). Thus your settings screen should like similar to the following: 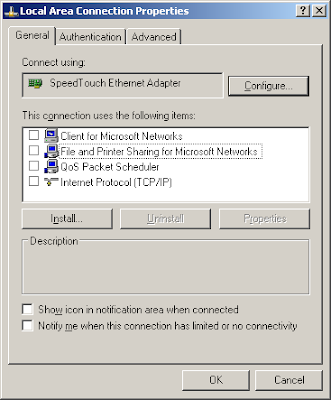 Second, to make the connection autodial, set it to avoid prompting for the username and password (which you must have saved) and to hide the interface during dialing (to avoid the possibility of the user clicking “Cancel”) and finally create a shortcut to the connection in the StartUp folder: 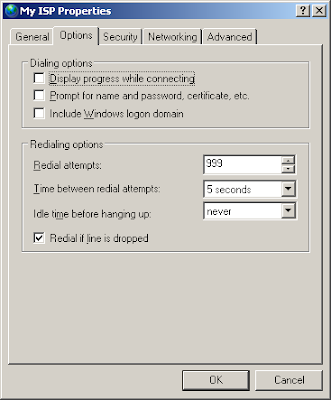 Finally, if you are using a non-standard DNS provider, it may be the case that it is slow to respond to the first query (I found this to be the case with OpenDNS for example, but I would still recommend using it). To circumvent it, include the following batch file in the startup folder (with the option to minimize set to avoid user confusion):

What this does is it waits for the connection to finish (or rather it waits 30 seconds, which should be sufficient in most of the cases), after which it tries to perform a DNS lookup. I found that this is sufficient to “kickstart” the DNS lookup process and all further lookups are speedy. The sleep utility is not included by default with Windows XP, but you can download it from many places, for example from here.

Update: I’ve seen some installations where the ISP gives an IP address to the customer on the “external” connection. In this case it is enough ok to unbind the protocol handlers other than TCP/IP. Netware services is definitely not not needed, so you can safely unbind it (and even uninstall it). In fact having it installed can make your welcome screen (the graphical which you can use to select the user by clicking on an image rather than typing the username) and fast user switching under Windows XP non-functional, as described in this Microsoft Knowledge Base article.

3 responses to “Configuring PPPoE under Windows XP for transparent operation”