I needed a quick, free webhost. Incidentally (it is funny how things come together sometimes) I remembered Andreas Gohr mentioning 000webhost.com, so I decided to give it a try.

Now, I knew that nothing is free, so I expected to need to insert some banner ads in the pages, however it seems that this hosting provider actively tries to trick users into running malware! Here is how the whole process works:

During signup or when you try to create the domain, you get message similar to the one shown in the image below (note: they may have changed their tactics recently or use some kind of filtering systems to target only Windows computers for example, because Andreas didn’t get this message). 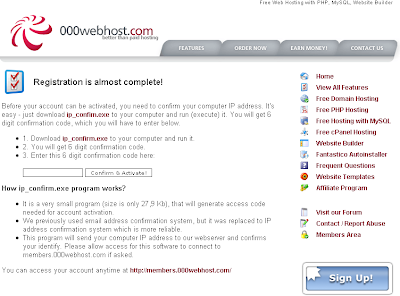 Now, my BS meter went right off the scale when I read this, since:

After confirming it with Virustotal that it is almost certainly malware, I decided to investigate further:

The conclusion: the site is knowingly distributing malware. I will complain to their upstream provider, maybe they can clear the situation up a little (or at least make them pull this malware download).

Update: here are some (not so nice) things I found on the ‘net about 000webhost. This is of course hearsay, so I can’t judge the accuracy of these claims:

Update 2: it seems that the “distribution selection” mechanism is IP based (rather than OS / browser based), as I tried the same steps from a Linux machine from a different netblock (but still from Romania) and it presented me with the link, while trying it trough TOR from a (virtualized) Windows machine didn’t. The conclusion is: you might not see it, but it doesn’t mean that it doesn’t exist 🙂