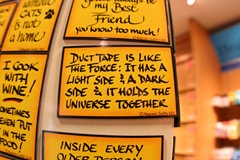 chycho.com seems to have a lot of cool videos, like this one: Just a reminder why you should never talk to the police: Some good advice to protect yourself. Of course this is just applicable in the USA to citizens (so it is not applicable to a large percentage of the people on so many levels :-)), but it is still interesting to watch.

Windows 7 beta is now available on the MSDNAA program, so I will be downloading and running it in the VM 🙂

If you want to edit Wikipedia, you might want to check out Wikipedia: The Missing Manual, because even though it seems that you can just jump in and edit anything, there are a lot of rules and conventions which you need to respect if you don’t want your edit to be reverted in very short time period.

Hyper-V R2 enforces separate (physical!) mangement NICs – it is nice to see such steps which will lead to more secure installations by default.

Via the Security Shoggoth blog: INetSim – an alternative to Truman to simulate the Internet. And it is written in Perl!

Via the taint.org blog: How to approach a newspaper interview. Interesting. However I’m very weary about talking to journalist, because (at least in the technical realm) I found a tendency to blow things out of proportions and quote you in a way that makes you look less knowledgeable and a spreader of FUD, even when it is not their intention.

Fixing DSL lost sync problem – very cool, I didn’t know about MTU’s / “half ringers”. I wonder if they are also present in Romania, since I know somebody who has been having similar problems (the situation is somewhat different here: AFAIK there is no demarcation point between the telco and you, the telco – which means Romtelecom – owns all the equipment and you are not supposed to touch it at all).

GizmoDrive – an other free solution for mounting all your ISO / NRG / IMG / CUE / BIN images. I personally prefer the free version of Daemon Tools (just make sure to uncheck the toolbar they offer). There is also the Virtual CD-ROM from Microsoft, but it is unsupported and can only handle ISO files (even though it is free).

From the vaporware, inc. blog: UDF repository for MySQL and info about fast string search algorithms.

From the Journal of Ovid: API to get stock quotes.

From Breaking Eggs And Making Omelettes I found out about c++filt, which is a nice little command line utility for Linux (or Cygwin if you are stuck with Windows) to demangle C++ decorated function name exports. Use it like this: