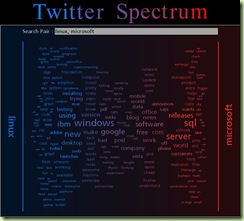 Lately I’ve posting a little malicious hosts, and here is the latest installment of the series:

The basic idea is: infected computers (“bots” or “zombies”) can be be used to perform network actions on behalf of their “masters”. Some of these actions are usually done by “server class” machines. Two examples for such actions are: sending emails (because the end-user doesn’t send the email directly, rather it contacts an SMTP server which does the sending on her behalf) and hosting websites.

This discrepancy (“sever” action performed by “client” machines) can be used to classify some actions as “suspect”. One way to detect client machines is by using passive OS fingerprinting based on the characteristics of the TCP stream. One tool to do this is p0f. Even though it is quite old and doesn’t recognize many of the newish operating systems (for example Windows XP SP2), it outputs a “fingerprint” which is unique for the given OS.

Using this tool I performed the following experiment:

The result was very interesting: the separation between “clean” and “malicious” webservers is very clear with very few errors either way (more quantitively: out of 10808 machines 186 (0.01%) were miscategorized as false positives and 58 (0.005%) as false negatives). What does this mean?