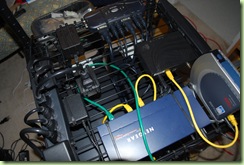 From my experience, compiling software is not especially hard, but most of the tutorials out there are somewhat dated (as this one will be in 6-7 months). But at least until then it can be useful, and hopefully I will find the time to update it later on. I’m using the trunk version of OpenWrt, which a little more up-to-date than 8.09, but most probably everything described here works with 8.09 (the latest release).

The main ideas would be:

Our goal (taken from the first linke tutorial) is to get the following little C program to compile and run:

The first step is to create a Makefile for it:

Place the files in the packages/helloworld/src directory of either the checked-out OpenWrt source or the Openwrt SDK. Now change into this directory and make sure that everything builds on our local system (without the crosscompiling magic):

Now to create the openwrt makefile. This will be located one level up (ie. packages/helloworld/Makefile):

The makefile should be pretty self-explanatory. A couple things I would like to highlight:

Now you are ready to compile:

Your package should now be ready. Copy the package (you will find it in the bin/packages/target-... subfolder) to your router (or better yet, a Qemu VM running OpenWrt – for safety) and test that everything works:

This would be all :-). Because of simplicity, this tutorial doesn’t cover the the calling of configuration scripts. Also, as far as I’ve seen, there is no easy way to include parts of other projects. For example, if I wish to create a package for LuaFileSystem, I would need lua.h (and some other, related files). However, I haven’t found an easy way reference it from the lua package, and have opted for putting a local copy in the src/lua subdirectory.

3 responses to “Compiling software for OpenWrt (and creating packages)”