The difference between additive and subtractive color schemes

I’ve known for the longest time that there are two ways of creating / describing colors: additive (RGB) and subtractive (CMYK). However I never really understood the equivalence between them, until recently, when I picked up a book which presented the general concepts of typography. This is very cool, so I’ll try to document it here (because I didn’t find it elsewhere on the ‘net – although it almost certainly exists).

Lets begin with the additive part: 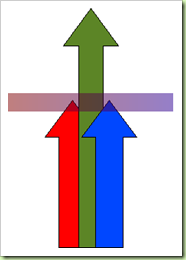 This is done by focusing one to three of the base colors (Red, Green and Blue) in the same point to create a given color. (Technically it isn’t “the same point”, just three points in such close proximity that you can’t tell the difference). The base colors can be generated in different ways: an electron beam hitting differently colored phosphor particles (CRT), colored LEDs or filtering out colors from a white light with colored polarization filters (LCDs). Already we can see a similarity between the “additive” and “subtractive” models: even when using the additive model, we sometimes create the light using subtraction (in the case of LCDs).

Now for the subtractive part: 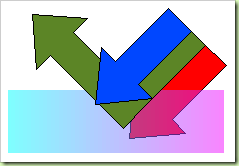 Here we have a light source emitting white (ie. containing all three of the RGB components) beams of light. These beams hit a surface and some of the components get absorbed (“subtracted” from the beam), while others get reflected. The ones reflected form the resulting color. From this point of view the subtractive model is analogous to the way LCDs create colors. The three colors used in the subtractive model (Cyan, Magenta and Yellow) are chosen because they absorb the different components (ie R/G/B) of the white light.

There are other technical details (for example: the presence/absence of each component is not a binary 0/1 number, rather a continuously varying one, resulting in an infinite number or colors. or an other: the absorption in the case of the CMYK model is not perfect nor uniform between the different components. also, absorbing all the light – ie. creating black – is theoretically possible by combining CMY, but it would result in a – relatively speaking – very thick layer of paint, which is why black paint is also used in the printing process), but the essence of it is: additive and subtractive models are very similar.

Hope this helps somebody 🙂