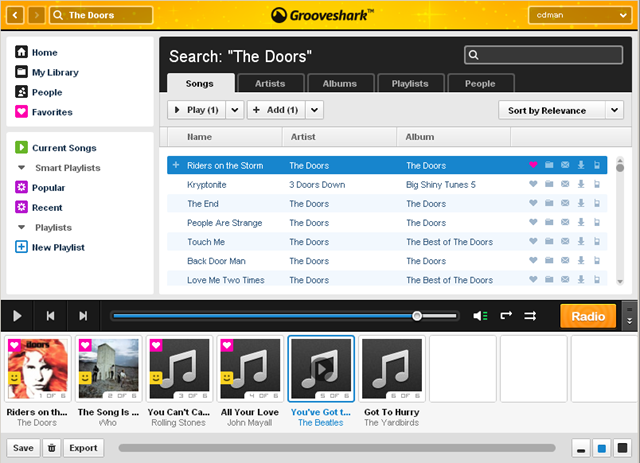 I’ve written about Grooveshark in the past, however I want to mention them again for a couple of reasons:

First of all, they introduced a new user interface, which works great. More than that, you can now seek in the songs! This means that Grooveshark directly addresses three out of the five methods of music use which I’ve enumerated in my original post. There are some small quirks (I don’t really like the popup-type controls, where you first have to hover over it for the useful part to appear), but those are just a matter of personal taste. They’ve also made it available as a desktop application via Adobe Air (currently available only for VIP subscribers).

Which brings me nicely to my second point: I’ve subscribed to their VIP services. I thought that I’ve been using them for a month now and I’m satisfied, so I should give something back aka. “Vote with my money”. So, as of today, I’m a Grooveshark subscriber. A couple of things I didn’t like about the subscription process: there is an additional tax of 15% to the advertised 3 USD monthly price. Also, the subscription payment is set as recurring by default. You can deactivate it later, but even so, it made me feel a little uneasy. Still, I decided to give them some of my money. Hopefully I won’t regret it.

As of now, I can only recommend Grooveshark to everybody! If something happens, I will update this blogpost.

PS. I’ve also removed the last.fm widget from my blog. Currently Grooveshark seems to be a much better deal than last.fm for approximately the same amount of money.

Disclaimer: I don’t receive anything from Grooveshark, I’m just a happy subscriber.

One response to “Grooveshark VIP member”