String.intern() – there are better ways 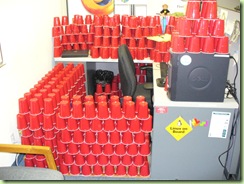 I don’t want to write a “considered harmful” article (because they are harmful), but after experimenting with different solutions I do have a strong opinion that there almost no reason to use String.intern() in Java. But let us proceed step-by-step.

First of all, what does String.intern() do? Go read the Javadoc for it and also take a look at String interning of Wikipedia. The essence of it is that if you have two strings s1 and s2 such that s1.equals(s2), there will be only one copy of the string stored if they are interned. From this definition follow the two usecases for string interning:

If you have different reasons for looking at String.intern(), you should think twice about them before going down the route. If you’ve thought about long and hard, and you still think that String.intern is the best solution for you, but not for any reason mentioned above, please leave me a comment! (Also, read the rest of this post, since it might give you a better alternative).

So, having the above usecases in mind, what is the problem with calling String.intern?

These are some very serious problems. What are the alternatives? The easiest one is not to use String.intern. Ok, lets say that you’ve performed measurements with relevant, production data and came to the conclusions that your problems need to resolved using this method. My recommendation would be the following:

The advantages of the above solution are:

I will post some example code later this week when I’ll post the slides for a presentation I’ll be giving to the local JUG, so be sure to keep an eye on my blog and my code repository.

Some resources on the topic:

6 responses to “String.intern() – there are better ways”