Putting the eval into Java 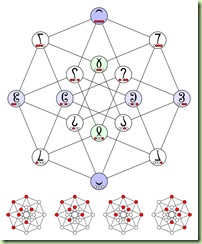 “eval” (short for evaluate) is usually the name given to the method in dynamic languages which makes it possible for the programmer to access the compiler / runtime. Here are a few links to the documentation for the function in different languages:

They are usually used to quickly evaluate a DSL (Domain Specific Language) expression. What I mean by this is the following: lets say that the user supplies an expression which can be easily (ie. with a few string replacements or regular expressions at most) converted into a valid expression in the current language. Then you don’t have to write your own lexer / parser / runtime to support this function.

To make this example even more concrete, lets say that you are implementing a simple graphing calculator where the user can supply the right part of the f(x)=… expression and you draw the function for a given interval of x. If the user supplies something like 1 + 2*x + 3*x*x, this is pretty much a valid expression in all programming languages (there are minor syntactic differences to be precise – like Perl/PHP requiring you to prefix variable names by the “$” sign), so you could simply use “eval” on it.

Warning! Running eval on unverified, user supplied code is a really, really bad idea! (yes, I know that red and bold underline is a little over the top, but this is just that bad! Never, never, ever do this! It is equivalent to letting everybody connected to the Internet (assuming that we are talking about an webapp) running arbitrary code on your server. Implement very strict filtering (based on whitelisting if at all possible) for such features!

Surely, you would say, such a dynamic feature isn’t easily accessible for a statically typed compiled language as Java… And you would be wrong! As of Java 6 each JVM install (including the JREs) includes the Java compiler, and it also includes a public API to access it. Using this feature you can implement the Java equivalent of “eval”: giving a string to the compiler and getting a class instance back, on which you can call methods. You can find the source in my SVN repo. It is (almost entirely) based on the following article from 2007 (just to give you an idea how long this option has been around): Create dynamic applications with javax.tools. An other (pleasant) surprise was the fact that this process doesn’t require any security privileges and works perfectly in restricted environments such as browser.

An additional advantage of using the JVM rather than your own runtime is speed: many man-hours have gone into optimizing both the source –> bytecode and the bytecode –> machine code transformations. Which brings me to an other possible use for this kind of solution: generating particularized instances of generic classes to give more hints to the JVM about possible implementations.

For example, the StrinkTokenizer class does the following when looking for separator characters:

Now imagine how much more efficient (in the sense of: easier for the JVM to translate into an efficient machinecode) this code would be if we knew that we have exactly one possible delimiter (as it is the case most of the time). Replacing delimiters.indexOf(c) with delimiter == c can give you an order of magnitude speedup for this particular code.

The takeaway should be: