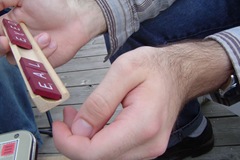 Some time ago I came over the following article: Fast CRC32 in Assembly. It claimed that the assembly implementation was faster than the one implemented in C. Performance was always something I’m interested in, so I repeated and extended the experiment.

Here are the numbers I got. This is on a Core 2 Duo T5500 @ 1.66 Ghz processor. The numbers express Mbits/sec processed:

Some other interesting remarks:

Picture taken from the TheGiantVermin’s photostream with permission.

2 responses to “Is hand-writing assembly still necessary these days?”