Every end is a new beginning

TL;DR: I’m shutting down the twitfeeder project (it was on lifesupport for a long time) so I mirrored a technical article from the blog in the hope that it might be useful for somebody someday.

Hosting on the Google App Engine means giving up a lot controls: your
application will run on some machines in one of Google’s datacenters,
use some other machines to store data and use yet an other set of
machines to talk to the outside world (send/receive emails, fetch URLs,
etc). You don’t know the exact identity of these machines (which for
this article means their external IP address), and even though you can
find out some of the details (for example by fetching the ipchicken page
and parsing the result or by sending an e-mail and looking at the
headers), there is no guarantee made that the results are repeatable
(ie. if you do it again and again you will get the same result) in the
short or long run. While one might not care about such details most of
the time, there are some corner cases where it would be nice to have a
predictable and unique source address:

To
be fair to the GAE Architects: the above considerations don’t affect
the main usecase and are more of a cornercase if we look at the average
application running on the GAE. Also, having so few commitments (ie.
they don’t stipulate things like “all the URL fetches will come from the
10.0.0.1/24 netblock”) means that they are free to move things around
(even between datacenters) to optimize uptime and performance which in
turn benefits the application owners and users.

Back to
our scenario: the solution is to introduce an intermediary which has a
static and well known IP and let it do all the fetching. Ideally I would
have installed Squid and and
be done with it, but the URL fetch service doesn’t have support for
proxies currently. So the solution I came up with looks like this:

To spice up this blogpost ;-), here is a diagram of the process: 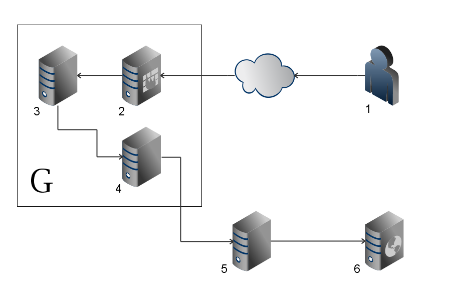 A couple of points:

Without further ado, here are the relevant sourcecode snippets (which I hereby release into the public domain):

Two
separate files are being used to avoid submitting the password to the
source repository, while still keeping all the sourcecode open.

Now with the code in place, you can test it using curl:

As
you can see, a custom header is used for authentication. An other
security measure is to use a non-standard port. Limiting the requests to
the IPs of the Google datacenter from the firewall would be the ideal
solution, but given that this was the problem we are trying to solve in
the first place (the Google datacenters not having an officially
announced set of IP addresses), this doesn’t seem possible.

Finally, here is the Python code to use the script from withing an application hosted on the GAE:

A little more discussion about the code:

While
this method might look cumbersome, in practice I found it to work quite
well. Hopefully this information will help others facing the same
problem. A final note: if you have questions about the code or about
other aspects, post them in the comments. I will try to answer them as
fast as possible. I’m also considering launching a “proxy service” for
GAE apps to make this process much more simpler (abstracting away the
setup and administration of the VPS), so if you would be interested in
paying a couple of bucks for such a service, please contact me either
directly or trough the comments.