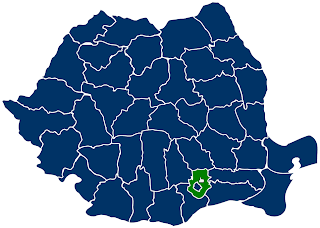 TL;DR – I’ve created a map of Romania’s counties (judete) using Javascript which can be used as an alternative for drop-down boxes during form input. It works great with FF and Chrome :-). See it in action and browse the source code.

The map is based on the SVG drawings from Wikimedia Commons postprocessed in Inkscape to simplify the paths (and to remove the Black Sea from it). After that it was converted to Raphael.js using readysetraphael. I also use ScaleRaphael to be able to render it at an arbitrary size. According to BrowserStack (a great service well worth its money BTW if you do web development!) it works with Firefox (starting with version 3.6), Chrome and Safari. IE has a hard time with it, but hopefully as the underlying library improves, it will start to work :-).