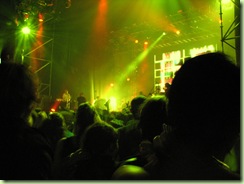 Disclaimer: I received no compensation for this review. All the opinions are my own.

There are a couple of actions you can do with music you have on your computer:

Thus, any service which aims to replace your music library should provide as many of these options as possible. Recently I found out about Grooveshark which provides all but the last two of these actions for free! Additionally they have a very slick interface and you don’t even have to sign up to use the service!

Additionally they provide an “auto-play” feature which adds “similar” songs to your playlist and seems to work acceptably (is is no Pandora though). An other thing I appreciate is the clear revenue model: it is ad supported or you can become a premium member for as little as 3$ / month and see no ads. I don’t know if the numbers are right, but they seem much more plausible than the one of Jango. I don’t want to dish them, but their lack of business model (no premium accounts!?) always concerned me and recently they seem to experiment with a lot of things (like taking away the possibility of directly playing a song and rather linking to Rhapsody) which is both annoying and concerning. My only concern is the fact that I found this site via the now defunct Seeqpod, which used (intentionally or unintentionally) publicly available MP3 files to power their service. While Grooveshark seems to use their own servers, rather than arbitrary hosts on the Internet, the file name quality suggests that these files were arbitrarily downloaded from different sources (public folders? P2P? – who knows), a practice which might get them in hot water with the RIAA, especially given that they seem to be based in the USA.

In conclusion: Grooveshark is great for now. Hopefully it will last in its current (or better) form for a long time. Below you can see an example of the embedded player:

Update: check out the new Grooveshark interface! It is very nice. Also, I’m a VIP subscriber to Grooveshark now!